The Standard Space series (2021), made from cast rebar, is neatly and orderly arranged in the gallery. Composed of 5 sculptures, the series draws viewers’ full attention while at the same time pulling them in for further exploration. In between each sculpture, a metal figure is surrounded by layers of rebar. They are in different postures; crouching, standing, or bending, as if they are imprisoned souls, subordinate, or even submit themselves to the reality under predicament. From another perspective, these trapped figures are like cocoons shackled in their "rooms", each of which is isolated and extremalized. Without adopting striking colors or forms, the artist Li Hongbo explains the dilemma faced by humans nowadays with the least visual language by placing the figures in the standardized forms. Standard Space is one of the two metal sculpture series in the exhibition of Li Hongbo: Empathy at Eli Klein Gallery. The metal works on exhibit are a continuation of Li Hongbo's practice and exploration on metal, following his Sovereign Asian Art Prize won in 2017. This exhibition is also his metal debut in the United States. 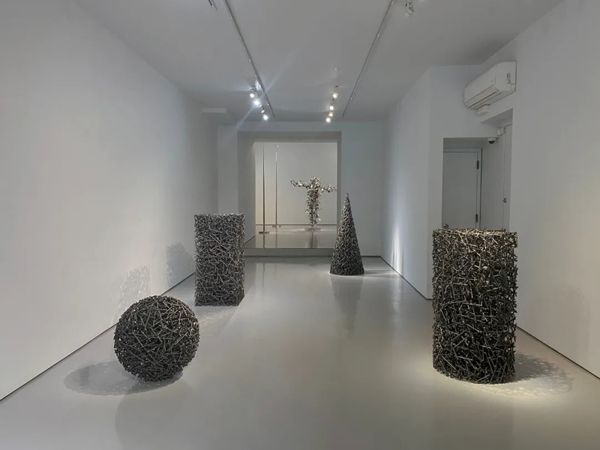 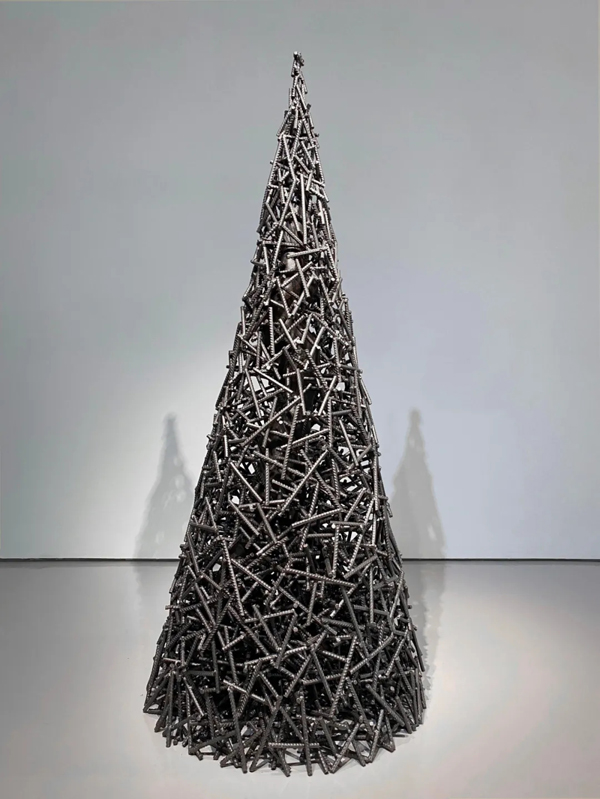 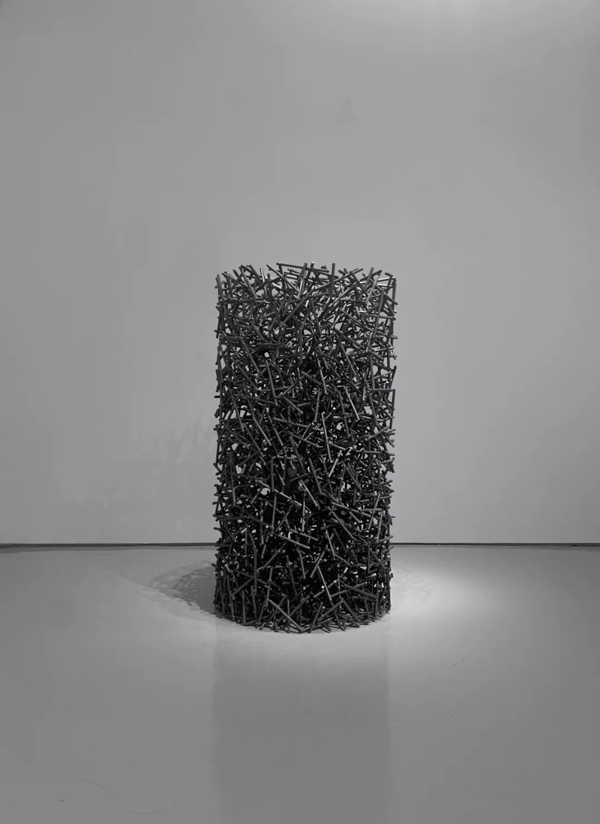 As previously described, the Standard Space series is a sculptural assemblage composed of five standard shapes, which, in Li Hongbo's view, constitute almost all of the shapes. Based on this viewpoint, the relationship between sameness and mutual construction of objects has been emphasized. If Standard Space is considered to be composed of two parts, an inner part and an outer part, then its inner part (the metal figures) interprets the gradually alienated and fractured interpersonal relationships in the urbanized society after the industrial revolutions. Although unlike his previous sculptural works made of diaphanous paper, which can be folded and bent without ruining the form, the metal works establish a psychological connection and resonance with the viewer through the universality and the history of rebar. By examining the characteristics of the material, Li Hongbo again probes into people’s living situation in the current era. The indispensability of rebar in industrial development symbolizes an equally essential ability in building healthy interpersonal relationships in modern society, which is “Empathy”, a central word in the title of the exhibition. Empathy, a critical aesthetic and philosophical concept, is derived from the German word Einfühlung (meaning “feeling into”), which was later coined by the British scientist E. B. Titchener and James Ward as English. Throughout the passage of time and countless misunderstandings and clarifications, empathy is still a topic that urgently needs to be properly comprehended nowadays. At the same time, the microscopic rebar world constructed in Li Hongbo’s Standard Space offers a glimpse of his empathetic thoughts on the reality and eagerness of others as he observes our society. Under the overflow of information, the inability of empathy caused by whether the lack or overabundance of empathy would isolate whoever is involved into a lonely island, and the dilemma is also a pathetic embodiment of the fact that individuals are unable to affiliate to a community. 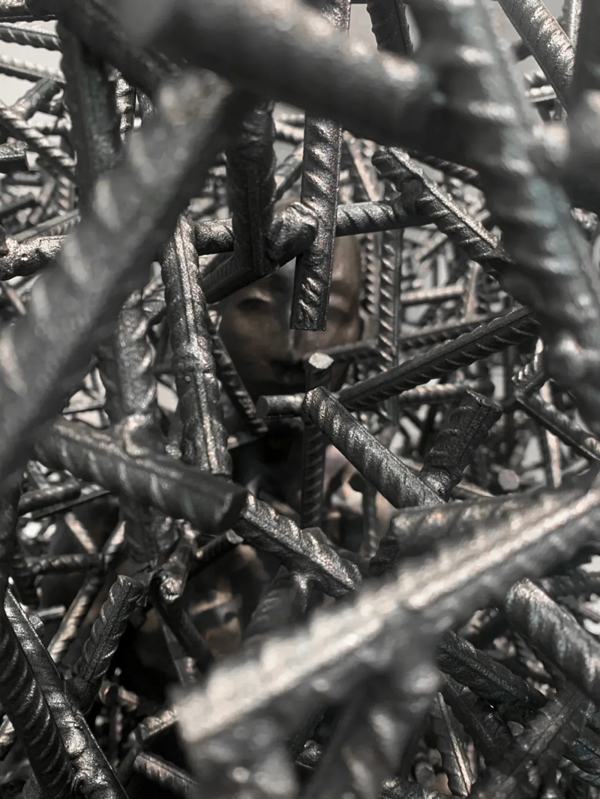 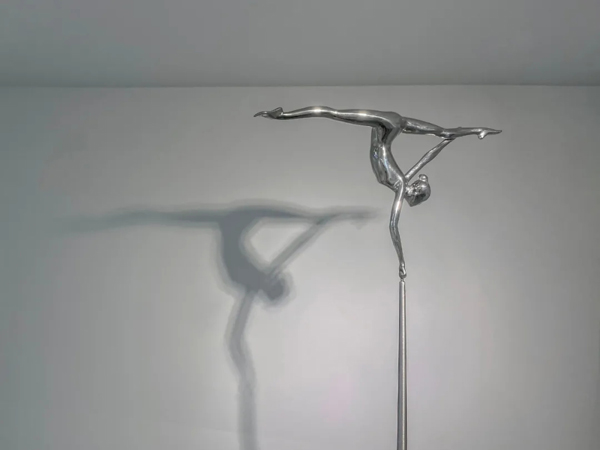 If Standard Space outlines a static picture that is indifferent and grainy, then the second part of the exhibition behind, Stage (2020) and Seasons of Flower – Rose (2021), is a dynamic figurative picture that is full of delicate and smooth texture. The Stage series is a collection of 4 sculptures, each approximately 3 meters high, standing at the four corners of the gallery. Gazing along with the thick to thin iron poles upwards, viewers can expect a graceful ballet dancer on top of the spire of each pole; they are illuminated by the spotlights as if they were the main characters at the center of the Stage. As far as the eyes can see, the appearance of the dancers is blurred, and their postures become the only feature that identifies them. Unlike the wide stage on which real dancers perform, the Stages created by Li Hongbo are merely a single touchpoint, connected to the dancers’ toes or fingertips. But these point-sized stages also work like critical points, referring to the metaphorical meaning of “balance”. It is both the technical embodiment of Li Hongbo’s balancing of weight, and the fact that he conveys through his sculptures, that is, altruism and self-interest in human nature are always swinging between turbulence and balance, which is what Wilson summarized as "the balance between group selection and the level of individuals''. It is just like the gymnasts in the Olympic Games who constantly break through and balance themselves in individual and collective environments. 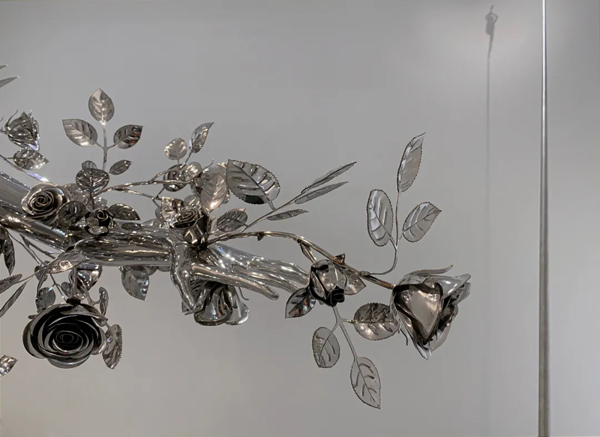 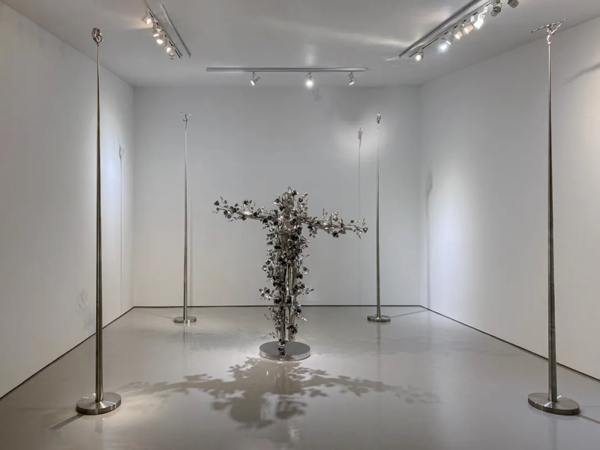 Seasons of Flower – Rose, a graceful female sculpture made of smooth specular material, is placed in the center among other Stage series sculptures, facing the entrance of the gallery. The figure stands on a metal base, with roses in full bloom attached to her body. Rose symbolizes an aggressive and aesthetic, which has the natural charm of being watched and loved. Under Li Hongbo’s interpretation, the roses produced under unified industrial standards reflect a social landscape –the perfect image sought by the younger generation in the face of converging aesthetics and the harsh normativity of being in the midst of rapid social change. As Dr. Maizels mentioned in his catalog essay, Li Hongbo is committed to defining a “metal mindset” that merges the polished speculative surface with the rigorous standards of the production line. However, compared with the previous two series, the smooth and translucent Seasons of Flower sculpture reveals a unique mechanical aesthetics, and the blooming roses add a sense of futuristic science fiction along with the extension of the body. It is feeling and embracing the surroundings with a more comforting and welcoming posture, like a dragonfly darting into the advanced technology era we live in with a light gait. By presenting it at the end of the show, the artist provides a positive inspiration as well as a far-reaching vision of new social relations in the future.